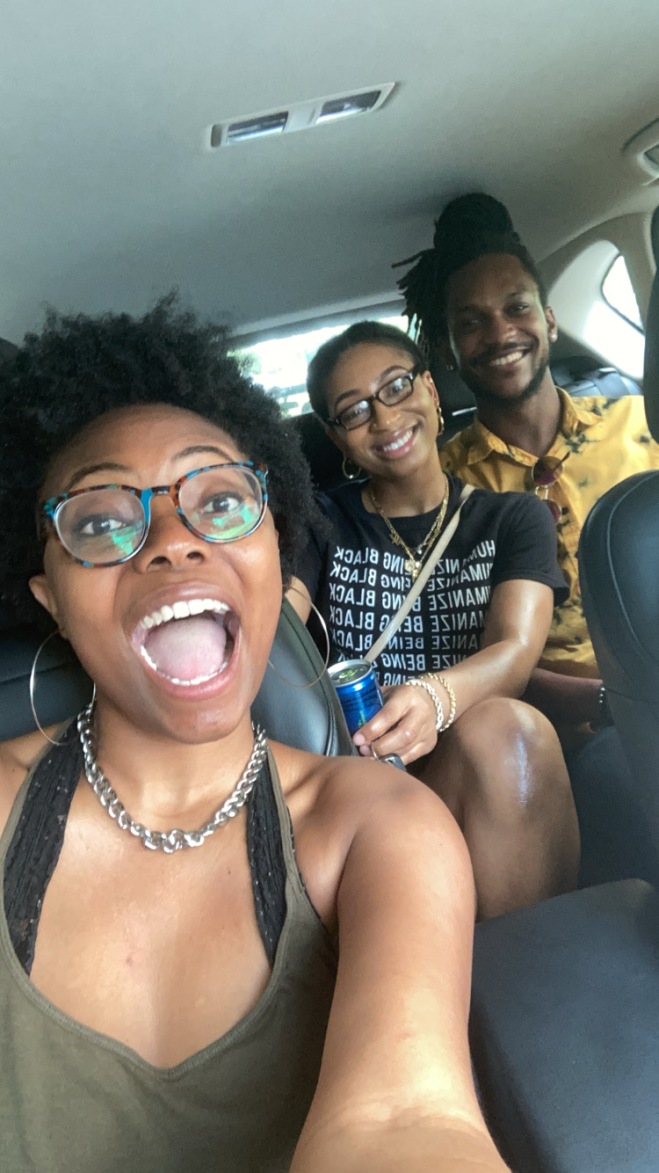 From the woman who would gladly bite your ass…

You are circling the rent-a-cop holding up the back wall, his eyes studiously trained on a spot well above your head, and I wish I knew why.

You are gorgeous, short to my 5′ 8,” with a round peach-shaped ass and an invisible waist. Your romper hugs in every possible place, stopping where the curve of your ass meets the top of your legs–your thass, as my friend calls it–leaving them bare, Black, likable-looking. I have never licked anyone’s legs, but I would lick yours, ma.

If you walked up to me the way you’re circling him, grinding in a way you know is irresistible, I wouldn’t even try. I would drop to my knees on this sticky lounge floor, wrap my arms around your waist, and lick your thigh. You deserve nothing less, looking like you do, and yet you are allowing the rent-a-cop to disabuse you.

The song’s tempo increases, and so does yours. You get closer to him, rub your ass on his leg, shimmy in front of his crotch, peek over your shoulder, whip your sleek black bob. “You have problems,” I see him mouth. I want to walk over right now, splay and anchor my legs wide, nestle my hand in the crook of your side, show him and you how to properly handle what you provide. You are a goddess.

He does not deserve you. The harder he refuses, the harder you try. I want to know why. He is Black, like us, and perhaps this makes his betrayal worse–betrayal because he knows the cost of his averted gaze, his failure to engage.

I watch you feign, walking away then doubling back, your efforts increased, seduction assuming desperation I do not wish to see. The rent-a-cop is tall, easily 6′ 2.” His uniform fits snugly across defined muscles. His hair is faded at the sides.

Perhaps the uniform is what makes him desirable to you. He is a Black man in power, and power is not a position to which we are accustomed. The closer we get, the higher the cost.

He is getting irritated, shifting his stance, verbally shooing you away. If there was no music, I’m sure I would hear his voice rise. Why does power make men cruel?

I watch you dance. I watch you give everything you have to someone who did not ask. I wish I had the confidence to ask.

I think sometimes, in the Black community at least, the danger is not in being a thing so much as in naming a thing. When I told my mom that I’m queer, she wasn’t surprised and I didn’t expect her to be. “You don’t have to label yourself for anyone, Cam,” she said. And I understood what she was trying to say, but it felt like the kind of advice someone gives for their own benefit. What I heard was, “I know, but why do you have to talk about it?”

My roommate made a similar comment when I told her about this post, something along the lines of, “You don’t have to Come Out though, do you?” I answered truthfully, that “No, I don’t.” My gender and sexuality really aren’t anyone’s business unless they are trying to fuck me, and if they are trying to fuck me, I would hope that they don’t care about either. But in the last 3 months, I have been called withholding by an ex-partner, a new lover, and a friend. And as a Gemini, a writer, and a fucking human being, I hate being misunderstood.

My last ex broke up with me because he thought being pansexual was something that went away once I started dating him. “I knew you were attracted to women,” he said, “but you didn’t tell me you were attracted to everybody.” He also fundamentally misunderstood when I tried explaining the gender binary. “What am I supposed to think when you tell me the woman I’ve been sleeping with for the last 5 months isn’t a woman?” I had been easing him into concepts of queerness for months. “Those are your beliefs, Cam,” he said, in our last fight. It had never occurred to me that he was listening, but didn’t think anything I was telling him was true.

This was my worst fear about Coming Out, realized–that people who knew me, I thought anyway, would suddenly treat me differently due to their own unconscious biases. When I came out to my mom while telling her about the break up, because it’s impossible to talk about that break up without Coming Out, she agreed with my ex, espousing stereotypes about promiscuity in the queer community. “I don’t blame him, Cam,” she said. “I know you don’t mean to, but you can be inconsiderate of other people’s feelings.”

In both of these instances, all I could think was that I never want to be accused of being anything less than 10 toes, at all times, ever again.

I am queer. I am Black. I am a woman. I am nonbinary. I belong wholly to myself. I do not feel compelled to uphold stupid and antiquated notions about gender. I use they/them and she/her pronouns interchangeably. I can be attracted to anyone, of any gender or sexuality, if they are intelligent and kind. If you know me even a little, none of this will come as a huge surprise.

For those who think Coming Out is unimportant, or doesn’t matter, this is not for you. Alternately, if language didn’t have power, we wouldn’t spend so much time regulating its use.