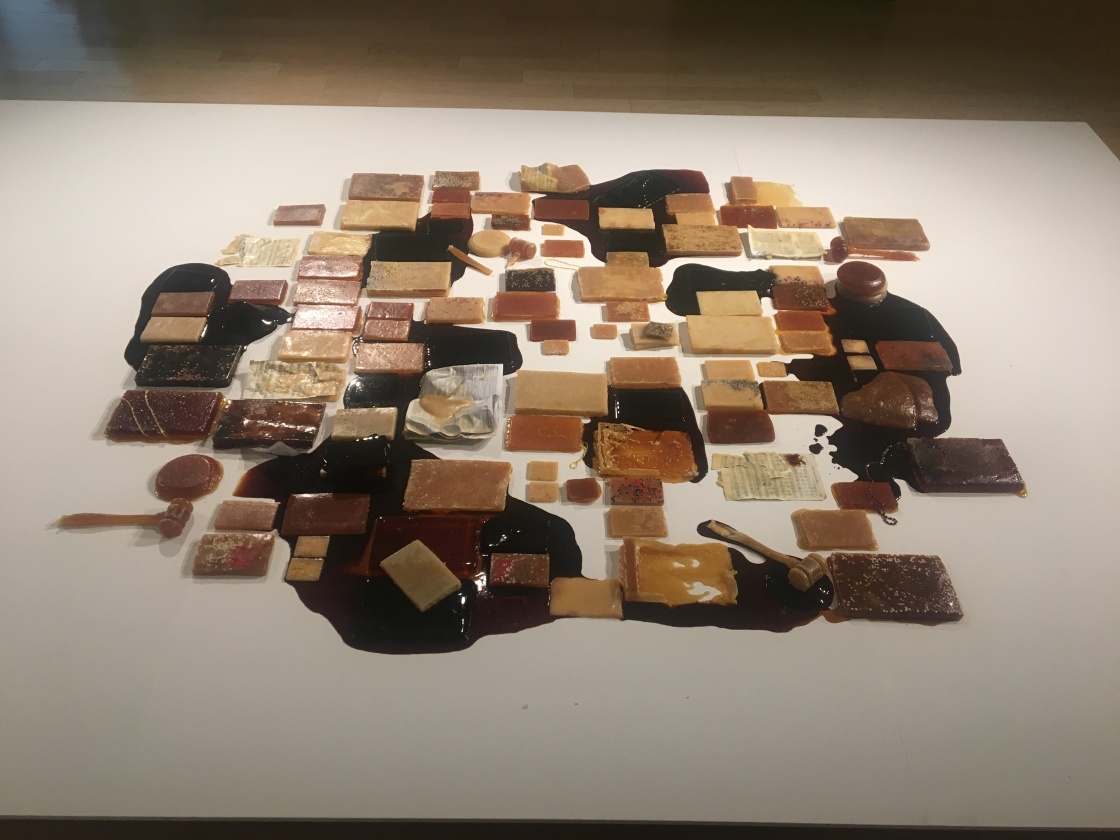 *Picture of work by Andrea Chung as part of the Coffee, Rhum, Sugar & Gold: A Postcolonial Paradox exhibit at The Museum of the African Diaspora in San Francisco, CA

So. I quit my fairly lucrative and very stable engineering job, that I didn’t like much, in a city I truly hated, to pursue a piercing feeling that I should be doing SoMeThInG eLsE with no clear idea what that something else might be as relates to job prospects, or paying my rent on time, or eating daily. I quit this job, with barely a clue of what I would do instead, and then made plans to move with my little brother to Oakland, California, which I have been reminded, repeatedly and unwillingly, is one of the most expensive cities in America.

My best friend, also an unemployed millennial finding herself (I am 110% including myself in the sarcastic italics. I find it’s helpful to pre-empt Baby Boomer scorn with either dripping sarcasm or wide-eyed earnestness) drove 4.5 hours to spend 2 days with me packing and repeatedly hauling heavy boxes down three flights of stairs, and taking them to the wonderful Black women who run the United States postal service.

I posted my apartment on Facebook market, and the very next day found a woman who had been travelling for a few years, had no furniture, and was ready to move into her own place immediately. She bulk bought all of my furniture, which meant I didn’t have to sell or move very much of anything. My landlady was so thrilled I found a subletter to take the place the day after telling her I was leaving that everything was signed in under a week. I shipped my 2007 manual Honda Civic alongside Benz’s and Mercedes, because Speedy is fucking gem, and I am not yet willing to pay monthly for a car that I barely want when I already own a car that I love.

I bought a one-way flight to San Francisco. My brother, saint that he is, found a 2ish bedroom apartment in Oakland. The rent, while exorbitant, was much better than what I’d expected given how much fear the adults had attempted to instill in our hearts.

I put in my notice to my former employer with no job lined up. I put in my notice 6 weeks earlier than my intended termination date to very obviously collect a final paycheck before leaving. I did good work there so no one was offended by my stalling tactics. On the contrary, they did every thing in their power to get me to stay, and wished me luck when I still decided to leave. I also set my termination date so far in the future to give myself time to “figure things out.” Which ultimately meant that I researched a lot of jobs, and opened a lot of tabs, and then succumbed to existential dread, and maybe applied to 4 of them over the course of 6 weeks. This was obviously a point of contention with my parents, who did not and still don’t, condone me leaving a job without having another job lined up, and see me choosing not to work rather than work a job I dislike as the epitome of millennial entitlement. I left the job anyway, causing a familial rift that’s still healing now that I’m actually here, which I sort of wrote about here.

And now I’m actually here. Sitting at a coffee shop on Piedmont Ave. Putting words to paper. Committing my process to permanence. For so long this move felt like the light at the end of the proverbial tunnel—there, but not attainable. Sure the light is a metaphor for enlightenment, and glory, and eternal sunshine of the spotless mind, and whatever else…. but you don’t ever actually reach the light. Not in this lifetime anyway. My brother and I have talked about living together as grown ups since we were old enough (and dumb enough) to want to be grown ups. But the dream always felt like just that—a dream. I never imagined it was something that could actually come true. And even the last few weeks, quitting my job, finding a subletter, applying and interviewing for job (singular, I’m being honest here), and packing my possessions into 50lb boxes and shipping them cross-country, have just felt like individual tasks that weren’t necessarily leading up to any concrete end.

But I am here. The sun’s shining. Denzel Curry’s blasting in my headphones. I’m sitting at one of those new fangled coffee shops that doesn’t offer wifi out of some misplaced attempt to force human interaction. I’m writing. I’m hopeful. I’m here.

Life update dump: 1) Hardly home but always reppin. Design by @kendal.burkins. 2) Full-time Communications Associate @ AI4ALL, increasing diversity, equity and inclusion in artificial intelligence research & tech. 3) Two of my pieces, poem “Getting Dressed” and short story “Two Lifetimes” were published in City College of San Francisco’s Winter 2019 edition of Forum Magazine. 4) I still wear my @ut_nsbe fleece to work like once a week.
Cute as shit. You can disagree but you’d be wrong.
Shoutout to the home team
More #SiblingSelfies all 2020. Also, notice how Kendal’s position does not change.
First Christmas ever away from the fam but still kept up old traditions. Alternately, I look more like Misha Patrice every day.
He say he hungry, this 😼 the kitchen...or whatever Meg said. Happy ending to a Happy #SpookySzn, y’all